I must admit that upon looking up what Manglish is, I was surprised to find out that English has actually spawned up a number of pidgins that are spoken regularly in different parts of the world. Not to create a confusion, Manglish is not a pidgin as it's a product of English, Mandarin, Malay, Tamil and several other languages that form the basis of its vocabulary. Hence Manglish is a creole language, and not a variant of English spoken by men, as some uneducated progressive nutjobs might first imagine. 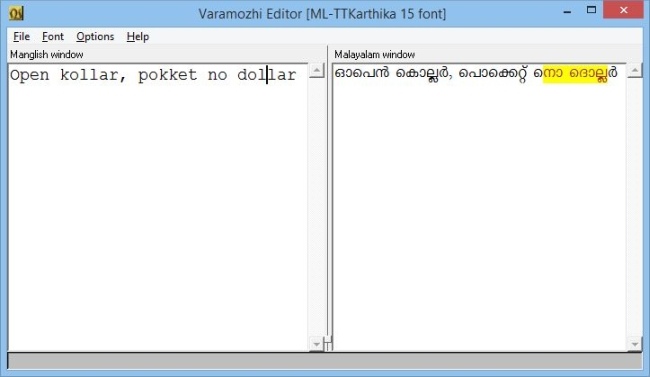 For being such a mixture, Manglish clearly warrants some sort of translation tool in order to be understood by non locals. Varamozhi Editor is such a tool. It translates Manglish into Malayalam. Although very limited in scope, I suppose that residents of Southern India might find it useful in certain instances.

This application comes with two Malayan fonts that will be installed with the main program, enriching your font library.

The app itself is rather simple. You can write Manglish on the left panel and see Malayan on the right panel. Surprisingly, the process works the other way around too. Of course, you would need a Malayan keyboard to see what you are actually typing, or at least figure it out by trial and error.

There's also a debug console that accompanies Varamozhi. I have no clue why would you even need one as an end user. However since I barely understand Manglish and have not a clue about the subtleties of Malayan, I could be missing the possible fact that a console is indispensable in such a situation. So I apologize for my indifference.

Varamozhi is a simple text translation tool. Being that I do not know neither of Manglish or Malayam, I cannot attest the accuracy of the translations. However, I find it fascinating to type blindly in Malayam. Especially when I have absolutely nothing better to do.

RELATED PROGRAMS
Our Recommendations
Varamozhi    FREE
Varamozhi The smart way to write correct Malayalam With Varamozhi, you can type in Manglish and you will see text in real Malayalam. A timely tested and very successful transliteration scheme used by thousands of people...
Continue to app

Rating:
HariSree Malayalam Keyboard Software    FREE
To get അങ്ങനെ simply type &quot;angane&quot; this is known as malayalam transliteration you have to simply type what you need in &quot; manglish&quot; it will be automatically converted to malayalam (screenshot 4) or in the traditional way...
Download